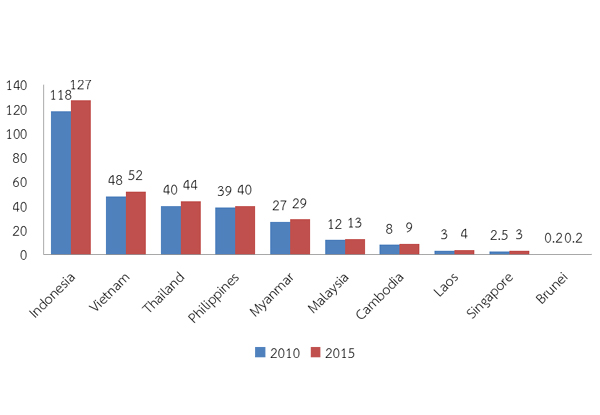 #C ASEAN
2018-09-15 22:17:552018-09-15 22:17:55 Admin TVBC   (4499)
Figure 1 Working Population in ASEAN (Million People)
Source: Asean Affairs Department of Foreign Affairs Ministry.
Abundant and diverse labor force
The uniting of the ASEAN countries as ASEAN Economic Community (AEC) is one of the important factors that accelerates the regional employment growth in the past 5 years and it is tending to increase in the future. It is expected that in 2025, there will be 14 million new job openings in ASEAN. Meanwhile, in the foreign investors’ perspective, labor force is a crucial factor that attracts interest to the region due to the high labor force ratio which is about 50% of total population or about 300 million people (Figure 1).
In the eyes’ of investors, availability of labor force is considered to be one of the most important production factors which in turn leads to country’s attractiveness for foreign investments. For instance, Cambodia has a competitive strength in its low labor cost, Vietnam has a competitive advantage in its inexpensive labor force and manufacturing capability, Indonesia benefits from its vantage of having the highest number of labor force among ASEAN countries, the Philippines has its strength in English language, while Thai is dominant for the job skills that need accuracy and Singapore has high quality and high skilled labor.
Skill mismatch – A reality check for ASEAN labor market
Even though ASEAN countries consist of various potential labor skills and a high ratio of labor force, it is undeniable that many countries are facing an issue of labor shortage in the business sector. However, the issue is not derived from the population structure problem or the population ageing but it is caused by the discordance between the labor force, entering to the market and the market demand which is called “Skill mismatch.”
Findings from the survey on the opinions of business owners in ASEAN countries towards the accordance between the skills and competencies of ASEAN labor force in each country and the employees’ needs, 50% of the owners or employees in Myanmar, the Philippines, Cambodia, Laos, and Indonesia show similar opinions that the labor force in each country doesn’t meet the employees’ needs and might be an obstacle for the organization’s growth in the future. On the other hand, the demand and supply matches in Malaysia and Singapore are higher. The main factors of the problems are caused from the high number of labor force but low-skilled especially in Myanmar, Cambodia, Laos, and Indonesia. Meanwhile, the Philippines, Vietnam and Thailand are facing with skill shortage which is due to the changed demand of industries but the labor skills are not developed simultaneously (Figure 2).
Figure 2 Accordance of labor supply and market demand
When analyzing the economic growth of the region along with job characteristics which predicted to be in the next 10 years, the demand of skilled workers or high skilled workers would be increased according to the economic development. According to the International Labor Organization and Asian Development Bank, Cambodia, Laos, Vietnam, the Philippines and Thailand are encountering a problem of labor qualification and competencies since more than 50% of labor force doesn’t match the demand of the manufacturing sector especially the tasks which need high skilled workforce. In the meantime, Indonesia is suffering the most among ASEAN countries since about 63% of labor force doesn’t meet the industrials’ needs although Indonesia has the highest number of labor force in ASEAN (Figure 3)
Figure 3 Expected number and ratio of “skill mismatch” labor in 2025
Source: International Labour Organization and Asian Development Bank, ASEAN community 2015: Managing integration for better jobs and shared prosperity, 2014.
Tangible movements to overcome the labor issue
The tendency of the “Skill Mismatch” phenomenon indicates an urgent recall to an improvement in the education and training system to prevent ASEAN countries from economic recession. Supports from government sector could help direct the labor supply to be in accordance with the market demand. For example, the Government of the Lao People’s Democratic Republic is planning to grant scholarships in the fields with labor shortage and are highly needed by the market such as carpenter, building contractor, and electrician. These scholarship students will receive tuition fee exemption and allowance during their studies. For Thailand, there is an effort to solve this issue which is targeting on increasing the ratio of vocational education to general education to 51:49 within academic year 2015
Karndee Leopairote | Managing Director, C asean | Karndee.l@c-asean.org 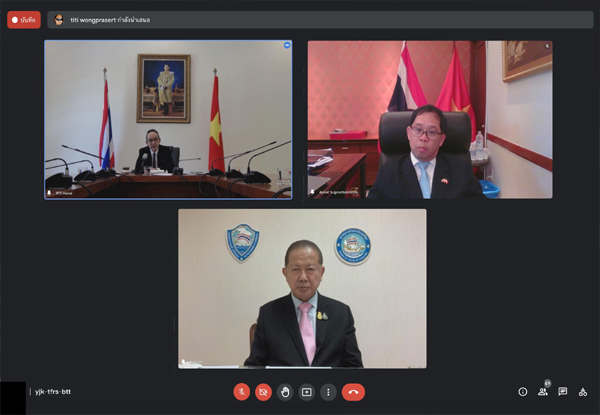 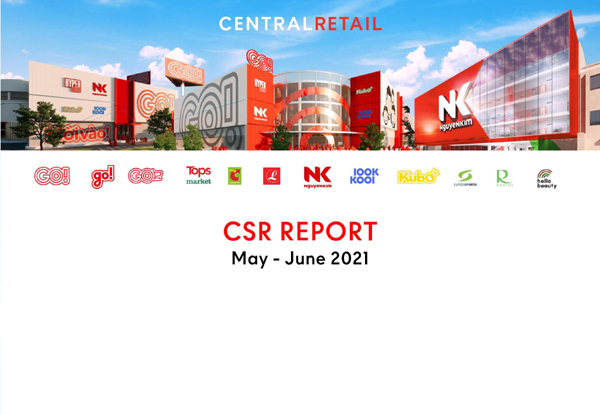 (556) on เลี้ยงต้อนรับฑูตพาณิชย์คนใหม่ของเวียดนาม Mrs. Tran The Thanh My